From whispers to billboards, Royalty and Parliament… menopause has found its voice

No longer consigned to the shadows, menopause is under the spotlight – loud and proud. 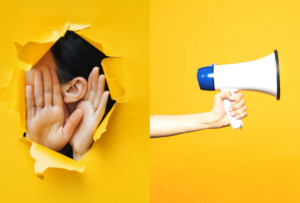 Remember the days people would mouth the word menopause, or whisper it in hushed tones or muted voices? And we’re not talking about decades ago but rather just a few years. For an event which is a natural transition in most women’s lives – or one that can occur through surgery – it was always surprisingly and depressingly taboo. But TABOO no longer!

And the pace of change is now rapid. Thankfully, we’ve moved from whispering about the ‘m’ word to reading and hearing about it in our mainstream media, in society, and in our workplaces. In fact, it’s even the topic of a billboard campaign launched by new organisation The Menopause Charity. From a whisper to a billboard… how fantastic is that?

Backed by a host of well-known names such as Lorraine Kelly and Davina McCall, the campaign is highlighting symptoms that can affect us every day – in and out of work. Campaigners like 50Sense’s Elizabeth Ellis and Clare Shepherd with their ‘Know Your Menopause’ GP posters and Diane Danzebrink campaigning to ‘Make Menopause Matter’.

Campaigns like this are giving menopause a voice, amplifying it as people share to their followers and supporters online. Taking menopause out of its box and talking about it without shame or embarrassment.

Now, the whispers are finding a louder voice with the second successful reading of the ‘Menopause Support Bill‘. The inquiry was launched by the Commons cross-party women and equalities committee.  From this, The government have taken action to cut the cost of repeatable HRT prescriptions and a new Menopause Taskforce means women experiencing the menopause will be better supported.

“Today is a result for women across the country. The Bill was never about wins for either side of the political divide – it was about wins for the 51% of the population who will directly experience the menopause.

The cost of HRT NHS prescriptions will be slashed – with the Government committing to working towards getting this down to a single prescription charge per year – and the new task force will look at all the other areas of support which are currently falling short and failing women.

I look forward to working with the Minister to revolutionise menopause support in this country and being world leaders in changing the narrative on something that has been a taboo subject for far too long.”

“Three in every five women are negatively affected at work as a result of the menopause. The repercussions of that are not merely individual. Excluding menopausal women from the workplace is detrimental to our economy, our society and our place on the world stage.

“Despite the fact that hundreds of thousands of women in the UK are currently going through the menopause – a process that can be both physically and mentally draining – it is ignored in legislation. It is time to uncover and address this huge issue, which has been left near-invisible for far too long.”

Special thanks to HRH The Countess of Wessex – the first time we’ve heard ‘menopause and fabulous’ so proudly and publicly spoken in the same sentence. Our charity partner, Wellbeing of Women’s campaign – ‘Menopause Workplace Pledge’, calling on all employers to support women and employees going through the menopause.

Becoming a menopause friendly employer: proud to display the badge

With over 250 employers already promising to prioritising menopause at work support, we hope to see more and more turn that promise into meaningful action. Joining over a 100 incredible employers who’ve already committed to or achieved  Menopause Friendly Accreditation status.

HSBC UK, first direct, M&S Bank, ATOS, Aster Group and Burness Paull demonstrated to Menopause Friendly’s Independent Panel that they met all of the rigorous criteria to receive the accreditation. This means they’ve brought in menopause awareness, education and support across all areas of their business.

It’s simply the right thing to do

“Supporting menopause at work is the right thing to do, both for organisations and colleagues,” says Deborah Garlick, Director of Henpicked: Menopause in the Workplace. “It helps to retain talent within an organisation and create an inclusive, supportive work environment. Colleagues’ wellbeing is placed centre stage, showing that an organisation is a great place to work, and in turn changing lives for the better today and for generations to come.”

Billboards, Parliament, Royalty, accreditation… the days of whispering about menopause are thankfully well behind us. Menopause is going big and reaching all areas of our communities, society and workplaces.

It’s a voice which can only get louder and get stronger… and that really is something to celebrate.