Menopause is a topic for everyone to understand. So it makes sense to choose menopause advocates from a wide demographic. 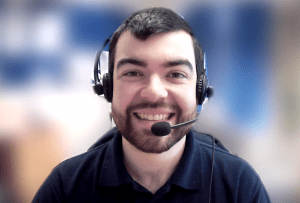 When Nottingham University Hospitals (NUH) NHS Trust decided to train up menopause advocates to help reach all parts of their organisation, Elliot Foster jumped at the chance. As a young man, he might not instantly fit the expected shape of a menopause champion. But as he points out, menopause is something that we should all know about and support.

“As a Trust, we’re about 80% female in terms of staff, but that means we’re 20% male. And quite a few of these men will be line managers of women or people going through hormonal transitions, so it’s something they need to understand as well.

“Personally, I had no idea about menopause before I did the training with Henpicked: Menopause in the Workplace. To be honest, it wasn’t something that had even crossed my mind before. But my background is in organisational psychology, and I’ve always been interested in workplace wellbeing with a focus on mental health. Of course, this is often interlinked with physical health – especially so with menopause.

“When I first interviewed for the role of staff wellbeing officer, I had to prepare a scenario-based conversation where I had to speak to someone at one of our health checks. I noticed that menopause often came up, so I did some research and learned more about the symptoms. Before I did this training, I’d have instantly passed any menopause-related enquiries onto a female colleague, who had been dealing with these enquiries already.

“I wanted to be an advocate for self development, too. As a man, menopause isn’t something you come across often, it’s not necessarily talked about in an open space. This is one of the things we want to be trying to change in the Trust, and to train men to be menopause advocates too.”

“For me, it’s not just about learning about menopause for the role. It’s a lifeskill. If someone is struggling and approaches you for help, you can’t just say ‘I don’t want to talk about it’. You have to be able to support them. I’m far more confident now knowing how to have these conversations, and to signpost where help is available.

“Everyone needs to know about menopause. I think we should learn about it from a younger age so it become less stigmatised. To me, it makes sense for it to go hand in hand with learning about puberty – it’s just the other end of the spectrum. While it might not affect men directly, it can affect them indirectly. More awareness in general can only be a good thing.

“I was a bit nervous during the menopause advocate training, as I was the only male there at the time. But I received a really good response, both internally and from my friends and family.  I don’t shy away from talking about it, I’ve embraced the training and am keen to support others.

“Going forward, we’re running a mixture of sessions, as well as separate ones for those who will experience menopause and also sessions for men only. People can choose where they’re most comfortable. We don’t want to make them too exclusive as we want to bridge the gap, but we also want people to feel comfortable in the sessions. It’s about getting the balance right.

“In such a large Trust it can be difficult to communicate to all of our colleagues. We do need word of mouth, which is a bit trickier at the moment. But we want to get the word out about these awareness sessions, so menopause becomes just another word.

“We want people to know what support is there and that they can have a productive, confidential conversation. The more awareness we can raise, the better we can offer this support.”

NUH launched its menopause policy in 2020, which was developed with a team led by the NUH Staff Wellbeing programme team, unions and Henpicked: Menopause in the Workplace. They ran training for line managers and colleagues during World Menopause Day week and run regular sessions for colleagues. They trained up 20 menopause advocates to keep the conversations and education flowing throughout their very large trust.

Deborah is passionate about helping women live better lives by educating on the facts about menopause. She’s a Director at Henpicked: Menopause in the Workplace and author of Menopause: the change for the better. And also founder of Henpicked.net.