Menopause, when periods stop for good, is a normal stage in every woman’s reproductive life. The symptoms usually begin in a woman’s forties, with the average age of menopause itself being 51. 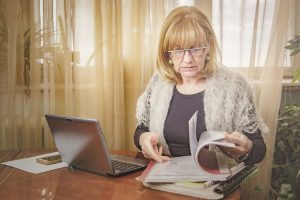 Experiences differ from woman to woman. Some report sailing through transition, others are pleased to no longer menstruate or be able to fall pregnant, or just embrace getting older.

Symptoms also vary. Some are probably familiar – like unpredictable periods or heavy bleeding, hot flushes, night sweats, poor sleep and emotional outbursts. Others are less well known, including growth or loss of body hair, clumsiness, pins and needles and moments of forgetfulness or poor concentration. About 25% of women have very debilitating symptoms.

When we consider that most women in the UK now work outside of the home, and that employment rates among women over 50 have increased dramatically over the last three decades, it is obvious menopause is an important workplace issue. This is for three main reasons.

The first is corporate social responsibility – the need to ensure that mid-life women have the highest possible quality of working life, and are able to work for as long as they choose, unimpeded by menopause-related difficulties. The second is the law – workplace discrimination based on gender or age is illegal under the Equality Act and BT were the subject of the first successful employment tribunal in 2012. Here direct sex discrimination and unfair dismissal were proven after the plaintiff was dismissed for under-performance, despite providing a medical note documenting that her poor concentration was due to menopause transition.

The third reason is economic. As demonstrated in the BT tribunal, menopause symptoms can affect performance at work. They can also contribute to higher sickness absence. If a woman has to leave work because of her symptoms, replacing her costs an average of £30,000. So there are important cost savings to be made here, as well as retaining expertise and experience.

And yet, as many women experience, menopause is not on most employers’ agendas. In fact, very few menopause-specific health and well-being policies exist in UK organisations. Little training or information about the menopause is provided for managers or any other employees. There is also evidence that mid-life women feel they are treated differently – perhaps even harassed or ridiculed – by others at work, whether they are actually menopausal or not.

The analogy we draw is to pregnancy and maternity. Imagine a woman in her early 30s telling her manager she is pregnant, and saying she wants to take maternity leave at a certain point and return to work when the baby is three months old. Nothing unusual there.

Now imagine the same woman, 15 years later, telling the same manager she is experiencing severe menopausal hot flushes and night sweats and wants to work from home when these symptoms are especially bothersome. The evidence suggests that, even if this woman felt able to disclose her symptoms (and many, many mid-life women workers do not), she is likely to meet with bafflement, at best.

There is a range of advice available for employers on menopause as a workplace issue. Some of the best guidance we have found is provided by Business in the Community, a responsible business network run by the Prince of Wales. There are also pioneers like retailer Marks and Spencerand the Nottinghamshire Police Service, who have provision in place already. Others, like the water company Severn Trent and the University of Leicester (where three of us work), are developing this provision, supported by consultants from Henpicked:Menopause in the Workplace.

It is important to emphasise that support mechanisms can cost very little – like allowing women to wear uniforms made of natural fibres or to work in an office with natural light, providing USB fans or supplies of cold drinking water and sanitary protection.

Other approaches, including specialist occupational health support, may cost more, but individual women will only need them for a short period of time. Flexible working, which can as we suggest above help women to cope during menopause transition, is something every UK worker has the right to request anyway.

To be clear, we are not advocating for “special treatment” for mid-life women workers. That is, not unless risk assessments during pregnancy and maternity leave represent special treatment. Neither are we suggesting that men don’t have mid-life experiences which could prove equally challenging to manage at work.

Instead, we think it’s important to normalise women’s experiences of the menopause so mid-life women can raise it at work without worrying about being judged or stereotyped; and to impress on employers how important it is that this demographically pressing phenomenon is no longer ignored.

If you’d like to find out more, please fill in the below form and one our team members will be in touch shortly.

“Once we started on this journey at HSBC UK with Henpicked, we were overwhelmed by the speed we were able to move at to become a menopause friendly organisation and the impact this has had on so many lives. Individuals, line managers, friends and families impacted, have enthusiastically embraced the opportunity to talk, share, learn and feel really supported.

The fact the menopause is no longer felt to be a “taboo” subject has in fact allowed other difficult subjects to also start being shared and talked about more openly.”