Does menopause in the workplace support or threaten equality?

It seems to me at the moment that some women are unwittingly playing snakes and ladders in the workplace due to their raging hormones at midlife. 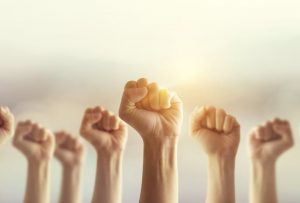 If you are one of the many women finding it hard to hang on to equality when you reach a certain age, struggling to avoid the greasy pole that menopause can send you sliding down, you are far from alone.

Feeling afraid of losing your grip and incensed that you worked so hard to climb the corporate ladder? Join the club.

Having recently celebrated the 100 year anniversary of women getting the vote in the UK and, as shown in the film Made in Dagenham, 50 years since women ramped up their campaign for equality in the workplace, the mayhem that menopause can sometimes create is a bitter pill for many women to swallow.

According to a recent survey, women in their late 40s and early 50s report they are struggling at work because of their menopause symptoms, with more than three-quarters stating that it’s for more than a week a month.

Lately, more and more celebrities have used their platforms to discuss all the changes, both mental and physical that come with ‘the change’.  As TV presenters Lorraine Kelly and Nadia Sawalha lead discussions about menopause, other celebrities have started to follow suit.

Just recently, TV presenter Trisha Goddard said menopause felt like “being thrown at the wall”, while supermodel Yasmin Le Bon mentioned that menopause had left her with “padding”, both emotional and physical.

It’s not too difficult to imagine that the crack in the façade of equality would encourage men in the workplace to jump right in pointing out that women aren’t equal after all. And that might seem a plausible view until you consider that menopause isn’t, as the Advertising Standards Agency would have us believe, a ‘serious medical condition’ but rather a transition that has a beginning and an end, just like childbirth.

In the last half century, we have come so far in our equality journey we wouldn’t think of discriminating against a pregnant woman. Why then are we so ready to label menopausal women as underperformers who are fit for the scrap heap?

So often women in the workplace are made to feel inadequate during menopause – it’s even sometimes suggested that they take a lesser role part time?  It’s hard to believe that we are talking about the 21stcentury.

Women, terrified that brain fog is robbing them of clarity at work, often have no idea that this is only a temporary state of affairs. In addition, hot flushes at meetings can give women a sensation of toe-curling embarrassment. Sleepless nights cause crushing fatigue, leaving many women feeling past their ‘sell-by’ date. Some even take a rash decision to quit their job, which they often later live to regret.

So is it that biology is playing a cruel trick on women who strive for corporate parity with their male counterparts, driving them to tears and in some cases putting them out to pasture? Or is it that the medical profession is failing women miserably at midlife, despite the wealth of published medical science outlining workable methods to enable a woman to cruise through her menopause and out the other side?

My money is on the latter, as I have been helping women to successfully overcome their menopause symptoms using natural means for over 26 years, using the tools that published medical science has presented along the way. The positive research papers on nutrition and lifestyle are not being read by all doctors. As a result the only tools they have on offer to assist menopausal women are drugs or hormones.

Corporates and large organisations are equally in the dark about most menopause matters. A few have recently implemented menopause policies in the workplace. But most organisations don’t even realise that they are losing millions of pounds off their bottom line each year because menopause suffering remains unaddressed, or that they are at risk of being sued for discrimination by women who feel they get a raw deal at work.  Some women going through menopause are labelled stress heads, others depressed and unable to cope.

It’s a well-kept secret that women commonly fear their brain is foggy because of early-stage dementia or a brain tumour, and incredibly some don’t even realise it’s perimenopause or menopause itself.  So many times symptoms simply turn out to be the consequence of low levels of nutrients and falling levels of oestrogen at midlife.

Simple changes to our diet and lifestyle can often help women to overcome symptoms completely, with the added bonuses of feeling better than they can remember and being protected from heart disease, dementia and the bone- thinning disease osteoporosis in the longer-term.

Women who have been unable to work due to menopause actually return to the workplace with enthusiasm once they feel better. So we need to call time on this question mark over equality.

It needs to be shouted from the roof tops that menopause is simply a transition and we should give women in the workplace permission and the resources to journey through it without fear or embarrassment.

If corporations invest in their female workforce, helping them through this short-term challenge, profits could grow and female staff will be both grateful and loyal. Members of the medical profession need to read the published medical literature on menopause and stop treating menopause like a medical condition.

In addition, men need be given tools to understand the plight of a woman at this life stage, understanding why they may need a little more support in the workplace.

Asking for help in the workplace due to menopause should never be seen as a sign of weakness or underperformance in a woman. But seen exactly as it is – a transitional phase that some women need a little support getting through.

About the author: Maryon Stewart

Maryon is an author of 27 books on women’s health, hormones and PMT. She regularly hosts free masterclasses helping women through menopause. Visit Maryonstewart.com to find out more.